Details
Posted:
January 14, 2021
Location:
Holland, Michigan
Show Map
Level:
Experienced
Sector:
Academic
Work Function:
Faculty 4-Year College/University
Preferred Education:
Doctorate
About Hope College
Hope College is a four-year liberal arts college where academic excellence and vibrant Christian faith join together in a supportive and welcoming community. Hope offers an academically rigorous, co-educational and residential education to 3,150 undergraduate students from more than 39 states and 34 countries. Affiliated with the Reformed Church in America since its founding in 1866, Hope College is known for its invitational ecumenical Christian atmosphere, friendly campus community, and well-balanced academic and co-curricular offerings. Hope's beautiful campus is located just steps from award-winning downtown Holland, Michigan, and less than seven miles from Lake Michigan. At Hope College, accomplished faculty and staff mentor students to recognize the interconnectedness of the world and cultivate the skills, perspectives and habits that help them flourish inside and outside the classroom. Recognized as a national leader in undergraduate research and scholarship, Hope provides exceptional professional preparation and life-changing educational experiences that equip students for success after graduation. The college has consistently ranked among the nation's top liberal arts ...colleges and is featured in the book Colleges That Change Lives. Hope College is financially sound, with more than 50 consecutive years of balanced budgets, an endowment of approximately $225 million and no deferred maintenance, and over $140 million invested in the construction of new facilities during the past 12 years. Since 2015, the college has completed three new buildings -- Kruizenga Art Museum (2015), the Jack H. Miller Center for Musical Arts (2015) and the Jim and Martie Bultman Student Center (2017). The next facility to be built will be a new home for the college's Campus Ministries programs, which is slated for completion in fall 2019. In 2015, Hope College launched its 10-year strategic plan, Hope for the World: 2025, which consists of six goals, focused on: academics; Christian formation; global engagement; community; reputation and influence; and value. Developed by the campus community, the strategic plan supports the college's mission, "to educate students for lives of leadership and service in a global society through academic and co-curricular programs of recognized excellence in the liberal arts and in the context of the historic Christian faith." Hope College is a community that aspires to be faithful, welcoming and transformational. Accordingly, the college is committed to being a place where all experience a sense of belonging. Students of all faiths -- and no faith -- are welcome at Hope, as are students of all racial and ethnic backgrounds. In 2017-18, 18 percent of the student body identified as a race other than Caucasian. On Hope's campus, there is broad understanding that, in order to best prepare students for lives of leadership and service in a global society, the college must have diversity among its faculty and staff. Sixteen percent of Hope's tenure-track faculty are from underrepresented groups, coming from both the U.S. and abroad. In the last five years, 41 percent of faculty hires have been from underrepresented groups. ABOUT HOLLAND Holland, Michigan is located in the heart of West Michigan, on the shores of Lake Michigan and Lake Macatawa. The city is known for being a friendly college town, a beautiful vacation destination, and annual host of both the Tulip Time Festival and Tulipanes Festival. With a city population of 33,000, Holland resides within the greater Holland-Zeeland area populated by 100,000 -- 30 minutes from Grand Rapids, 2.5 hours from Ann Arbor and Chicago and 3 hours from Detroit. Holland features a picturesque downtown just steps from the Hope College campus -- home to restaurants, cafés, shops and a popular farmer's market -- as well as miles of sandy beaches, nationally ranked school districts and charming parks throughout the surrounding area. In recent years, Holland has earned recognition for being one of the "Best Beach Towns to Live In" (WalletHub, 2018), "Prettiest Towns" (Architectural Digest, 2018) and "Best Cities for Global Trade" (Global Trade Magazine, 2017) as well as the #1 "Best Small City to Start a Business" (WalletHub 2018). The City of Holland has also earned several top honors for the "America in Bloom" competition, including awards for "Environmental Efforts" and "Coolest Downtown." The Holland area is strengthened by its diversity, with people of color comprising 33% of the city's population. The Latino community is particularly vibrant, accounting for 24% of Holland residents. For more about neighborhoods, recreation, businesses and life in Holland, visit the city's "Live in Holland Michigan" website. Hope College seeks to be a community that affirms the dignity of all persons as bearers of God's image. It is Hope College policy not to discriminate on the basis of age, color, disability, family status, genetic information, height, national origin, pregnancy, race, religion, sex, or weight, except in the event of a bona fide occupational qualification. Hope College is an equal opportunity employer.
Show more
Show less
More Jobs Like This
BACK TO TOP 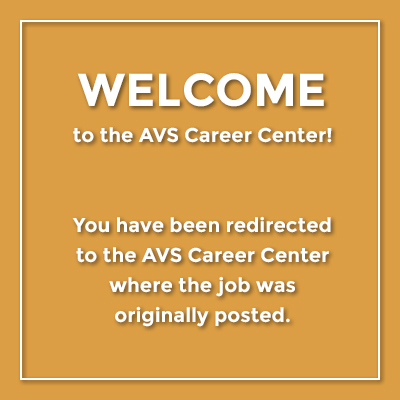 For assistance, please call 1-888-491-8833 or e-mail customerservice@support.boxwoodtech.com.
Be sure to tell employers you saw their ad on the AVS Career Center!